For Jessica and Josh Heffinger, becoming parents was something they knew they wanted, so they were overjoyed in 2010 to find out they were pregnant with their first child as Jessica explains:

They decided to name their daughter Riley and were ready to see their first glimpse of her at an ultrasound 21 weeks into Jessica’s pregnancy. They were told there would be around 50 pictures taken of their baby girl, but shortly after it began, Jessica says the ultrasound was over.

“I told Josh something’s not right, there’s no way she took 50 pictures. Of course the techs aren’t allowed to say anything; she walked out and when she walked out I turned the screen around and there were only 4 to 5 pictures the screen and one was the heartbeat and it was a straight line,” said Jessica.

Jessica and Josh soon learned their first child was stillborn.

“She looked perfect, like a little baby at 21 weeks.”

“I don’t really cry a lot and during that time I shed a lot of tears and to see my wife and the pain she went through, it was really hard on both of us,” described Josh.

Jessica and Josh were given a memory box by the hospital which included pictures of Riley, her foot prints, and hospital bracelet. The Heffingers have added to it over the years with pictures their three other daughters draw for Riley and mementos they received during that difficult time.

“It reminds us of what we went through and how many people came and supported us and prayed over us,” explained Jessica.

“It was special to us. While it may not be the most decorative thing in the world, but just having little things to remember her by,” said Josh.

Since 2010, the Heffingers have had three more girls, but Riley is forever in their hearts.

Jessica began donating to an organization that provides gowns to families who have lost children when they suggested she start her own ministry in Bowling Green as Jessica explains:

“It hit the ground running, seamstresses started coming out of the woodwork.”

Jessica started Glory Baby Ministry and now has seven seamstresses who volunteer their time to make gowns for families who have lost babies. If a baby is too small for a gown, they give them a Riley blanket, named in honor of her daughter.

“I can’t imagine what they’re going through, but if making these baby gowns can help in any way to ease their pain and show God’s love that’s what we’re doing, that’s what we’re hoping to do with these gowns,” explained Glenda Logan, a seamstress.

One of the families the ministry has helped is the Hatcher family who lost their son at 16 weeks in utero.

“One of the things that ran across my mind the entire night is what was I going to bury him in and if there was anything and I was really really concerned about that,” described Shelby Hatcher.

“It makes it a lot easier knowing you’ll have something to bury your child in, then nothing,” explained Jamie Hatcher.

As Glory Baby Ministry continues to provide gowns for families that need them, Jessica hopes that Riley’s memory lives on through the families her ministry is helping.

“Being able to talk about her really on a daily basis, the kids pray for her every night and it just brings a smile to our faces that she has changed so many lives,” said Jessica.

Glory Baby Ministry doesn’t charge the families for the gowns or shipping. They take wedding, bridesmaid, flower girl, and formal dresses to make their gowns. The only color they don’t accept is red.

The seamstresses pay for materials out of pocket and the ministry pays for shipping so to help offset those costs they’re having a Facebook auction October 15 – 18.

For more information, click on the link on the right hand side of the page. To contact them through e-mail: glorybabyministry@gmail.com. 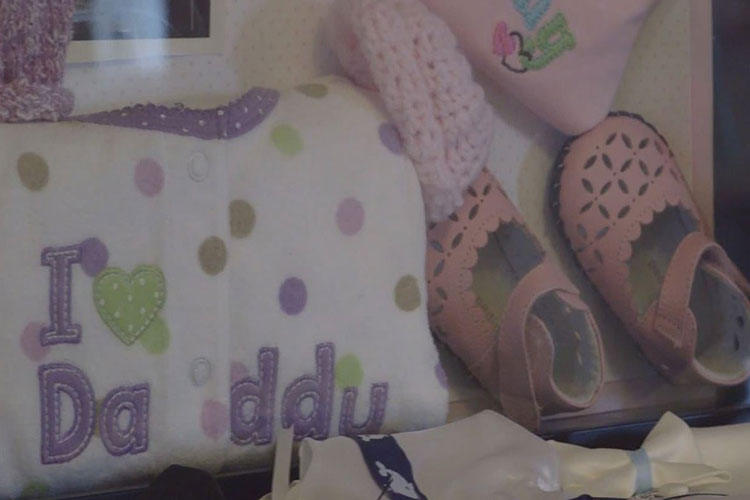